Mexican Shares His Experience of Entering Poland Under Lockdown 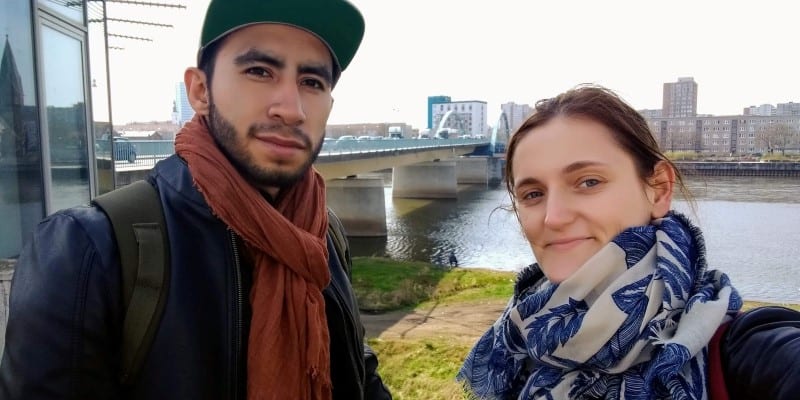 Since March 14, 2020, the borders (for commercial flights and international trains) of Poland have been closed to prevent the spread of the coronavirus in the country.

There are people who can enter Poland by land:

For anyone from those two groups above, upon entering Poland they are required to carry out a quarantine. People have to sign a document, where they affirm that they will not leave their home for 14 days. A person who does not respect the mandatory quarantine can be fined up to PLN 30,000 and even up to 1 year in prison.

For the latest updates on Coronavirus in Poland click here

Mexican Tells Us About His Experience Entering Poland in Quarantine Season

The Mexican – Holkan – who has lived in Poland for 2 years, and who has a legal stay in the country, shares his story of everything he had to do to be able to return to Poland after vacationing in Mexico while visiting his family.

Holkan and Sonia at the border in Słubice, Poland

Holkan left Poland together with his Polish girlfriend Sonia on February 29, on a plane with a stopover in Madrid, from where they left for Mexico City. They left the country weeks before the Polish government introduced measures such as the closure of borders. They planned to return to Poland on March 18, following their same outward route (Mexico City – Madrid – Warsaw).

While in Mexico, they were following the news and gradually learning about the coronavirus situation in Poland.

“On March 14, upon learning of the closure of borders in Poland, we decided to see what options we had to come back, including changing dates and other options.”

Holkan and Sonia were evaluating options, whether it was advisable to extend their stay in Mexico or return to Poland.

“We decided that it would be best to go back to Poland as soon as possible, so Sonia reviewed the whole plan.”

“The travel from Mexico City to Madrid went smoothly, but the plane was at about 50% or more of its capacity. Each person slept in a row of three seats and we had a lot of space ”

Upon arrival in Madrid, they had to wait 18 hours at the airport for their next flight. According to them, at Madrid airport, there were not many people, but still, everyone was isolating from each other as much as they could.

Due to the closure of borders, there were no more direct flights from Madrid or another European city to Poland. The option they thought was best was to get as close as possible to the Polish border, so their next destination was Berlin, Germany, and they bought a flight to this city.

After waiting for 18 hours, they were ready for their next flight from Madrid to Berlin.

“…there were problems to board our flight to Berlin because on that night Germany introduced a new restriction on not letting non-European citizens into the country… so Sonia had no problems but I did ..”

Holkan had problems even having Karta Pobytu (temporary residence permit in Poland), they would not let him pass and a manager had to be asked to come to review the new German regulations, to see under what conditions the Mexican could be allowed to enter.

“We were informed that there were two conditions:

1. family reasons (if you were married to someone from a European country)

2. transit (if the stay in Germany was just to pass through the country and not to stay there, which was my case) ”

As their flight only reached Berlin, their plan was to go on a regional train to Frankfurt Oder, and from there cross the border into Poland. But they had no way of proving that they were only going to be in transit in Germany, since it was not possible to book any ticket that proved that.

That is why they decided to buy a bus ticket from Berlin to Warsaw online, and with this prove that they had no intention of staying in Germany.

“We decided to buy a bus ticket for the Flixbus company (according to us it was a failure of the Flixbus system because it allowed you to buy tickets even though the routes had been canceled). We bought a ticket that said Berlin-Warsaw for 200 PLN and they let us board the plane. ”

In all that journey, apart from the accumulated fatigue that they had since leaving Mexico, they noticed that there were no people outside.

Finally, they reached Frankfurt Oder, and from there they had to walk 2km to the Polish border.

“While crossing the border, walking from Germany to Poland, there was an officer all dressed in a bacteriological suit, measuring the temperature of the people. Later, at border control, we had to give our personal data and sign that we agree to undergo a mandatory quarantine”..

Upon entering Poland, Holkan and Sonia took a private bus to the city of Poznań, from there a train to the city of Kutno, and finally, took a train that would get them to Warsaw.

Bus in Warsaw during quarantine

“Because of the trains canceled everywhere, and our last-minute plan to enter Poland, our journey lasted approximately 48 hours in total”

Holkan and Sonia are already at their home in Warsaw, but they have to do a mandatory quarantine for the next 13 days.

Are you a Mexican that cannot leave Poland due to the coronavirus? Do you want to share your story about how you are living the temporary quarantine in a Polish city?

Send us your story at contacto@mexicanosenpolonia.com and we will gladly share it.